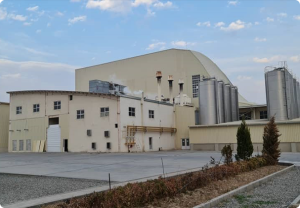 Nearly eight decades have passed since the beginning of the first milk industrial site in Iran. Over the years, we have seen many developments in improving the quality of milk and milk products. The dairy industry is an industry that is directly related to public health. For this important reason, the mission of dairy and milk powder factories as well as experts in the field of food security is quite clear. In this article, we try to examine the different and quality-oriented view of Kesh Sanat Damparvari  Shameh Shir into the manufacturing and especially the production of powder products. Unfortunately, according to a wrong tradition, which has also affected a number of dairy companies in our country, low-quality and low-hygienic milks are usually sent to dry milk production under the pretext of high processing and distilling during production. Various studies on the role of health and physicochemical quality of milk as a raw material have been performed on different types of milk powder. The general result of all studies, if mentioned in one sentence, is that a quality product can never be expected from a poor-quality raw material; as a result, it seemed that the view of a chain of quality animal feed to humans (Feed to Food) could be the only solution. For this reason, almost two years before launching the Company, monitoring, quality control and increasing the level of improvement of livestock milk was on the agenda, so that the quality of livestock milk is regularly monitored by experts and activities are preventive and elimination of health or physicochemical inconsistencies was carried out by the experts of the Company with continuous inspections. When the company started with the support of two Dairy farms (Chaltasian and Taliseh), which currently produces more than 50% of raw milk required for baby formula in Iran as well as supporting two years of work to improve milk quality, the company put into operation with about 300 tons of milk production per day. On the other hand, with the opening of the Shameh Shir factory laboratory, the input milks were monitored with higher sensitivity and in shorter periods, so that now in many parameters, stricter standards than the national standard of Iran are considered.

At present, the factory has a large share of Iran’s milk powder production with about 500 tons of quality milk per day and daily production of about 40 tons of skim (non-fat) milk powder. Quality control during the process and various tests and beyond the requirements of the Iranian standard on the product, were the next step to complete the quality chain, so that the internal standard for milk powders produced in this collection is on a par with baby formula. For example, in relation to microbial cases, from each batch of milk powder produced, in addition to the requirements of the Iranian national standard, culture tests and the possibility of isolation of Bacillus cereus, Clostridium sulfate reduction and Enterococcus faecalis should be performed. It should be noted that in the Iranian national standard, total microbial count, number of coliforms, E.coli as well as Coagulase positive staphylococci are required. Also, during the production process, due to the assurance of the quality of the milk received, the minimum allowable temperature is given to the milk during the process, so that in terms of quality indicators such as WPNI, the produced powder is in the preferred range and includes a high biological value. In terms of physicochemical parameters such as protein, due to the high non-fat dry matter of the input milk, this parameter is higher than 35% in the produced milk powders. Also, due to the special conditions of the drying tower and the low temperature during the process, the produced milk powders have a very high solubility. Other important parameters that have happened to be discussed in the specialized and even the public communities in recent years are the issue of aflatoxin M1 in milk, dairy products and milk powder; In Shameh Shir Company, due to regular monitoring of dairy farms and setting strict internal standards on raw milk entering the factory, the amount of aflatoxin in milk powder produced in this complex is much lower than the national standard set for milk powder; so that in the repeated experiments that have been performed on the produced milk powder, the amount of aflatoxin M1 has not exceeded 0.07 PPB, while according to the national standard of Iran, the authorized amount of aflatoxin for powdered milk is 1 PPB. It should be noted that due to quality-oriented strategies and also the high sensitivity of the Company’s quality team on antibiotic resistance, except for tetracycline and beta-lactam antibiotics, which is a standard requirement of Iran, sulfonamides, chloramphenicol and Streptomycin antibiotics are also traced in the input milk. The set of activities carried out in order to improve the quality has resulted in the production of high-quality milk powder that passes all the quality parameters of the Eurasia and European Union. At present, despite the short time that has passed since the opening of the Company, Chaltafarm powdered milk is exported to Syria, Iraq, Pakistan, Turky, Sri Lanka and the United Arab Emirates.

more information
about us

The first choice of customers in domestic and international markets with competitive quality in the dairy industry.

It all starts with milk.
The story of Sheme Shir agro-industry and animal husbandry and our relationship with milk began in 1998. This was the year that farmers and ranchers decided to start a joint venture in the Shemeh Shir dairy factory as a company, and as a result of this partnership, to strengthen their position in the market and secure the sale of their milk. Today, Shemeh Shir Agriculture, Industry and Animal Husbandry is one of the major dairy companies in the field of milk absorption in Iran. We provide valuable milk nutrition to millions of consumers daily in Iran and around the world. Not only in the form of milk itself, but also with a variety of products derived from milk.

Our goal, our program

The goal of Shemeh agro-industry is to nourish nature with nature. Provide our pastoralists now and for future generations. This is the compass and the basis of our strategy: our goal and the plan of agriculture, industry and animal husbandry can not be achieved by focusing on the short term. That is why we are focused on the future.

For our customers in Iran and export to various countries around the world, daily consumption products such as milk, yogurt, cheese, buttermilk, and desserts and baby food, as well as for the market of professional producers of semi-finished products such as cream and butter, raw cheese, condensed milk And supplies the ingredients of some food industries and the pharmaceutical sector. And by the end of 1400, Shameh Shir agro-industry has employed 200 capable and efficient workers.